A wise man once told me that October is the best and busiest sports month of the year. Indeed he is a smart man.

The NFL and College Football are in full swing. Hockey has begun and the MLB playoffs are always a classic. But of course we cannot forget about the NBA, who sneaks in one or two games at the end of month. Oh what a wonderful time of year it really is. With Training Camps and preseason games beginning and the season right around the corner, It’s time to take a moment and rank the top ten NBA players for the upcoming season. Best NBA players in history? Another time. Remember these are my opinions, but you should agree with them.

Do I already have you hot and bothered? There is no doubting who the best shooter in the game is right now and soon to be in history. It’s Steph. While he still has a while to catch up to Reggie and Ray, he has shown the power of the three ball and the true meaning of on fire. Last season he put up 54 at MSG because he felt like it and single-handily beat a better Denver team by unloading is aerial attack. Yeah he was that good. He averaged 23 a game last season with already a group of scorers now Golden State added Andre Iguodala, which means more space, more time and more three’s for the NBA’s deadliest sniper.

For the past three years everyone in sports has been fed up with Dwight Howard and his antics. Will he or won’t he leave Orlando. Will he stay in LA? Well now he is in Houston, ready for a new era. Since everyone was caught up in all the hype surrounding him, I think we all forgot how special this guy is, a once and a generation center in an age where the Center position is dying out. Let’s not forget he averaged a double-double in LA where he was disinterested and still hurt. News flash: he will only get more dominate in Houston. Having Kevin McHale, one of the best low post threats in history as your coach and the dream as your personal coach will make Dwight once again unstoppable. Harden and Howard along with a solid cast of characters like Parsons and Lin will make Houston a Western contender this season.

Forgive me for putting the greatest power forward of all time on the list. I forgot he is “old.” Except in no way does that matter to Timmy or his game. Since the day he entered the league, he never solely relied on his athleticism or speed. Instead, he’s probably number one on most dads list’s out there because he thrives on fundamentals and technique. His game is as smooth as a baby’s head and led an aging Spurs team to the cusp of an NBA Championship. If it weren’t for Ray Allen, everyone would have been talking about this man’s legacy this off-season. Not that Timmy would like that, but accept it, he can flat out ball.

Maybe a little under-appreciated because he can be selfish with the rock at times, but who can blame him? Ever since he arrived in the Big Apple he has been spectacular, bringing back the Knicks buzz that NYC so desperately needs. He won the scoring title last year and led the Knicks to an impressive 54-28 record.  There is no doubt that Anthony can fill it up at will and expect him to do plenty of that this season. The Knicks have won plenty of games on his shoulders and have lost some too. But since when was New York not a live by the sword die by the sword type of town? Love him or hate him, He may be the only guy in the NBA that can match LeBron on both sides of the ball for 48 minutes in any given game, now that’s something special for a special city.

Ready or not National Basketball Association, Derrick Rose is back and is taking names. Only two preseason games in and it’s not hard to tell that the former MVP (the last one not named James) is confident and itching for a fight this season. There is no doubt, Derrick is going to attack the rim and finish over, under and around anyone in his way, just like ole’ times. We’ve seen the potential Rose has and during his 18 month layoff the only thing I’ve continuously heard is that he is stronger, quicker and his outside jumper is going to be lethal. Expect Rose and co. to run the table this season in the East but will have to face James and the Miami Heat. Good thing Derrick and the Bulls were never afraid of an uphill battle. 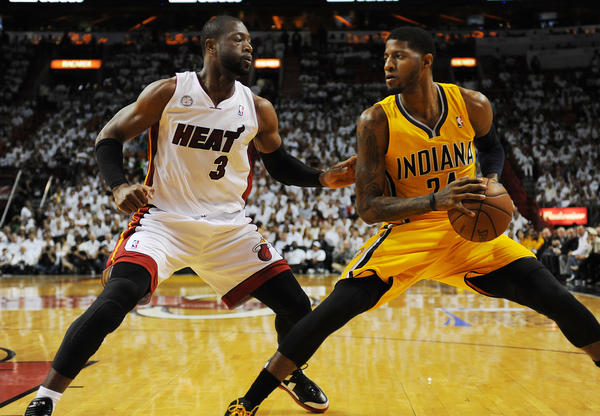 A tie? More like a changing of the guard. Old vs. New style. When Wade entered the league, he was the best finisher at the rim at the two guard since a certain someone we call the GOAT. That’s high praise. Someone who has three rings and has put on courageous and legendary performances in the playoffs in the past few years battling injuries deserves to be top 5. But let’s not forget that pre-LeBron he was as dominate as anyone was in the league. Now assuming more of “Pippen-like” role in Miami, there is no doubt he is still the favorite. Speaking of favorites, Indiana has one of their own. Many still say he has some growing to do, which I don’t know what they mean because Paul George is 6’10” and has an incredible skill set. His length and size make him the most athletic man I’ve seen at 6’10” (Easy folks, ‘Bron is 6’9″) The performance he put on in the Eastern Finals against LeBron, really announced himself as superstar. He can shoot and get to the rim at ease, once he creates a post up game. Forget about it. Indiana is back, and it’s now an arms race in the East.

I’ll be the last one to say that CP3 is the best PG in the game because of allegiance to Derrick Rose, but since Rose took the year off to give Paul a head start, I’ll rank him higher, for now. With all due respect though, Chris Paul is all around the best point guard in the league. He can pass, shoot and play defense night in and night out all the while being an impeccable leader. He may not be the tallest guy out there but he impacts every game he sets foot in. If the Clippers have any chance at the Finals this season, it will run through Paul. With a new Coach in Doc Rivers, Paul will be pushed harder than ever before, which will ultimately make him one of the best.

Notice how I put the period there. That’s because Kobe Bryant is a complete sentence. And at this point that’s all you really need to know. I still do believe he is a top three player in the game, because I take into account what a guy has done in the past, but Kobe isn’t worried about the past, he has a lot of work to do. Coming off an Achilles injury that usually ends careers, Kobe as usual, is just getting started. When he does return, he will be apart of one of the worst Lakers teams in recent memory. Kobe will start to play once the doc gives him the green light because for one, LA needs him,  and two he isn’t worried about the future and the beyond as he knows father time and two decades of the NBA and Olympic basketball is taking its toll. Bryant is hungry to prove everyone wrong once again and is after number 6. He may not win it this year, but leave no doubt that Kobe will add to his legacy this season by taking an awful Lakers team and making them playoff contenders, because it’s Kobe, do you expect anything less?

One of the best, if not the best closer in the game, Kevin Durant is money in the bank from anywhere on the court. His silky smooth stroke, elite athleticism and 6’10” frame makes him virtually impossible to match up against. Last season he averaged a cool 28 points per game all the while taking on more of a leadership role and ball handling duties as James Harden was shipped to the Rockets and Russell Westbrook going down with a knee injury last year in the playoffs. Already been to the Finals once, Durant knows what it takes but will have to do it more on his own than ever before due to Westbrook being out for the first two months or so. For the guy they call “easy money sniper” nothing will come easy besides his jumper this year.

Every King has its reign, and right now LeBron is at the peek of his powers winning another MVP and his 2nd ring. Last year in the Finals it was obvious that once a kid afraid of the spotlight now owns it. The infamous “Lost headband game” in Game 6 where he willed the Heat to victory and to force an eventual Game 7 that they would go on to win. As far as James’ developed game goes, he is the most complete basketball player of his generation. He can be the center and post up anyone in the league, or the point guard and facilitate passes all night long. He averages 26 point 8 rebounds  and 8 assists pretty much every single night. He still has a long way to go to solidify himself along with Jordan as one of the greats but he isn’t even thirty yet, think about that for a moment. He will enter his 10th year in the league this season which 1) makes me feel old and 2) only makes you wonder how much he can accomplish for the next ten. Love him or hate him, he is a joy to watch and players like LeBron don’t grow on trees. For all the hype he was given coming out of high school, he has surely exceeded those expectations and that’s saying something.

Go ahead, test me... Cancel reply

Get to know the Goat